Bike and Winter and Life

Bike and Winter and Life

The cycling season is at a standstill, but not for everyone. Most urban cyclists will garage their bikes in the winter, the more enthusiastic cyclists they will endure.  To the last, to the snow and beyond. And how to stay safe on the road then. Driving on open roads is a real hazard even in “ideal” conditions, let alone in autumn and maybe even in winter.

The most enthusiastic have been preparing for some time by sleeping in yellow, green, white, pink and red pajamas since the ascent of Rogla, Pogi and our other boys, and those who live at a slightly higher altitude also in polka dot shirts. So psychology works, even in this way.

And if we were active in the summer and the legs are firm, the lungs are powerful, other metabolic processes are fine, we are not afraid of anything. On a bike we can sing the Predin song, We are not afraid of anything if the skiers are with us… Well, skiers solve their problems differently, but we cyclists can be really scared in autumn and part of winter or even hole winter. Justified.  For car motorists, truck drivers and other road users, a cyclist is usually a creature, or in Slovene, a creature (screamer), someone who does not shout if you run over him. When the cycling season is over, cyclists slowly disappear from the usual conscious attention of drivers.

Too often, drivers overtake cyclists an inch from the pedal, and for a man an otherwise important centimeter now becomes the line between life and death. If that first missing inch puts him on his nerves, the second one will take him to life. So here the devil takes the joke. And how to provide joy, happiness and safety to cyclists who are not driven because of winter to gyms and fitness centers ?

Like this. Tried, allowed, legal “trick” countless times, which has kept me alive for years: 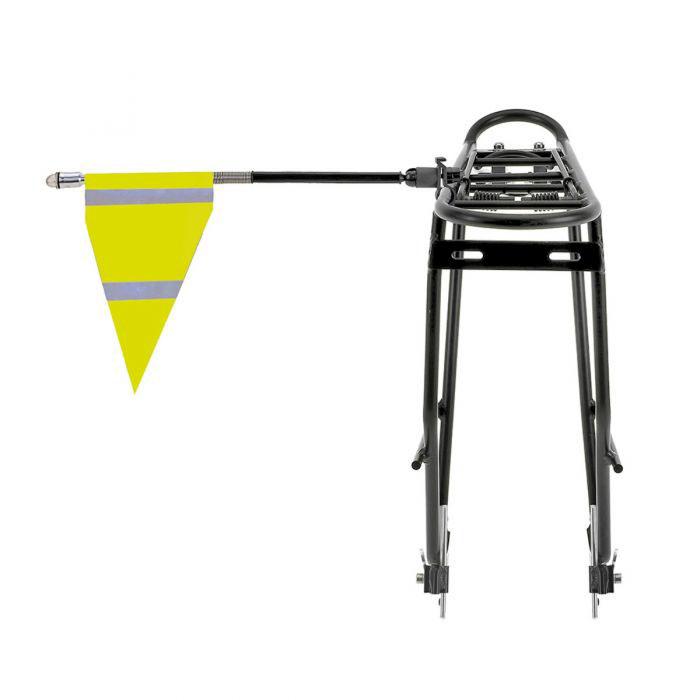 The previously mentioned centimeter from the pedal thus becomes a respectful meter, which is understood even by completely crazy drivers. And believe me, there are not a few of them. The official fact that every fourth person in Western culture has an obvious mental disorder is very scary. All of these people are in traffic and at the same time potential killers. In between, there are psychopaths, hyper- and hypotonics, diabetics, epileptics, ojojoj, even narcoleptics. Well, be enough. Whoever you are, dear cyclist, you came to this world to live and not die, especially not under the wheels.

SO, ONCE AGAIN; FLAG AND FROM HERE WITH SONG: FORWARD FLAGS OF GLORY.

We use cookies on our site for the proper functioning of the site and the recording of site visits. By agreeing you allow us to use cookies.

When you visit any web site, it may store or retrieve information on your browser, mostly in the form of cookies. Control your personal Cookie Services here.